What is Behçet’s disease?

Behçet’s syndrome was probably first described in ancient times by Hippocrates but more recently the Turkish Physician Hulusi Behçet described the condition in much greater detail.

Most of the clinical symptoms of this rare condition are believed to be due to inflammation in the blood vessels (vasculitis) and includes recurrent mouth ulcers, genital ulcers, skin rashes, arthritis, eye inflammation, gut inflammation and neurovascular disease. It can affect blood vessels of many different sizes.

Behçet’s seems to follow the ancient silk route, typically affecting people from Eastern Asia, the Middle East and the Mediterranean. It is rare in those from Northern Europe. In the UK, cases are sporadic where it affects 1 in every 100,000 people. Men and women are affected equally, although men tend to be affected more severely, with a greater number of symptoms and more frequent recurrence of the disease.  The peak age for developing the condition is between 20 and 30.

The cause of Behçet’s disease remains uncertain. Given the geographical pattern, inherited causes (genetic) are likely; an immune gene called HLA-B51 has linked with the condition.

Therefore individuals with a relative with Behçet’s disease have a slightly increased risk of developing the condition. It is likely that there are additional factors that contribute to its cause, such as in response to an environmental trigger, such as an infection.

What are the symptoms and signs of Behçet’s Disease?

Behçet’s disease may affect many areas of the body resulting in the following problems; 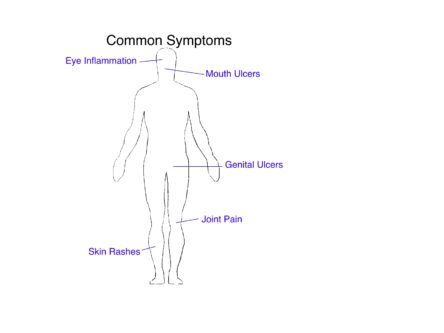 Occasionally, other parts of the body may be affected, which may alter balance and speech, and some patients have issues with their memory. Abdominal cramps and diarrhoea can occur if there is ulceration in the gut lining, and if this is severe, there may be bleeding from the back passage.

How do we diagnose Behçet’s Disease?

There is no specific test that can diagnose Behçet’s disease, but the doctor may be able to diagnose the condition based on the pattern of symptoms. If Behçet’s disease is suspected, additional tests, such as imaging and blood tests, may be completed in order to exclude other similar conditions.

There is no cure for Behçet’s disease, treatment varies according to the area of the body affected, and the symptoms reported.  The aim of treatment is to stop any long-term complications happening.

Treatment may only be necessary during attacks of the disease, if the symptoms are mild.

If the symptoms are more severe, it is likely that in addition to steroids, the patient will be prescribed a treatment to dampen down the immune system, which will help to prevent flare-ups of the disease.

Monitoring of the disease will be undertaken to ensure the medications are working. This will be in the form of review clinic to monitor the activity of your disease. Blood tests will be taken to assess the levels of inflammatory markers and the function of affected organs, particularly if patients are on immunosuppressive medications.